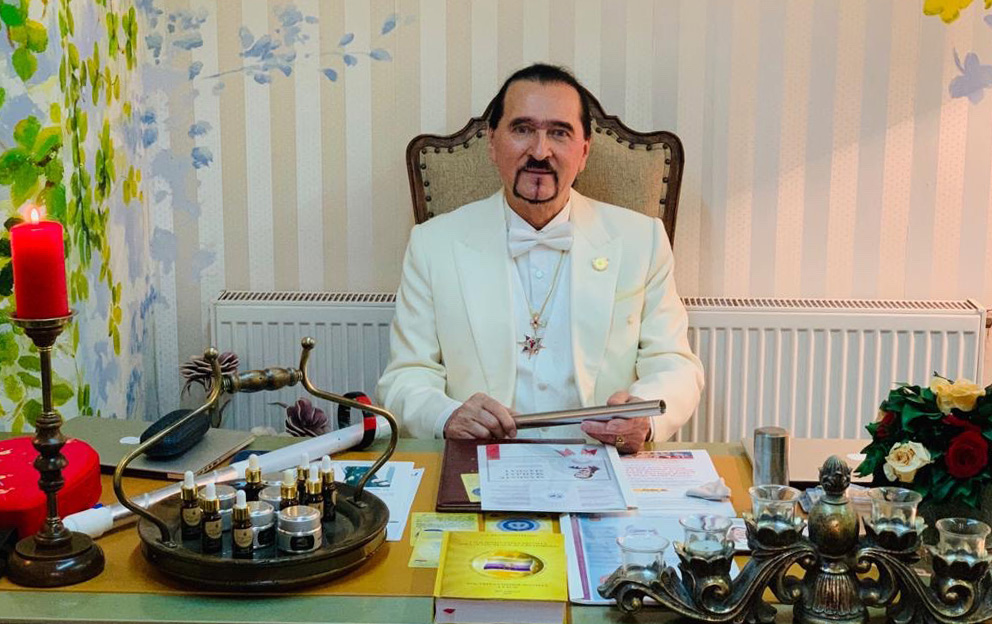 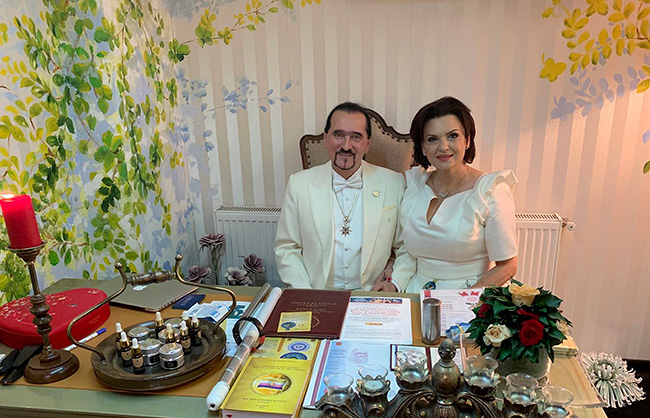 Eternal youth and eternal life is a reality!

The quality and number of years a person has lived depends on TIME. We are well aware that a person is given a small period of TIME for an active and creative life. Many outstanding people did not have time to receive their recognition during their lifetime - they did not have enough TIME. According to this TIME is the most valuable product on earth. We often hear - TIME is money, but not only - TIME IS LIFE. Our Psychoinformational Technologies (PSY-I.T.) of LIFE TIME MANAGEMENT using the PSY-I Cosmic Matrix.GENOME-33 are the newest and most progressive in the world. Their development, testing and implementation in closed and open laboratories took about 50 years. Owning this colossal capital - an invaluable product of "ETERNAL YOUTH AND LIFE", using it, we are able to direct all the finances of the world to implement the project "THE NEW GOLDEN AGE OF THE CREATOR" and turn money into an instrument of GOODNESS AND CREATION. All investors of our global project, earning money, acquire ETERNAL YOUTH AND LIFE in our VIP center. 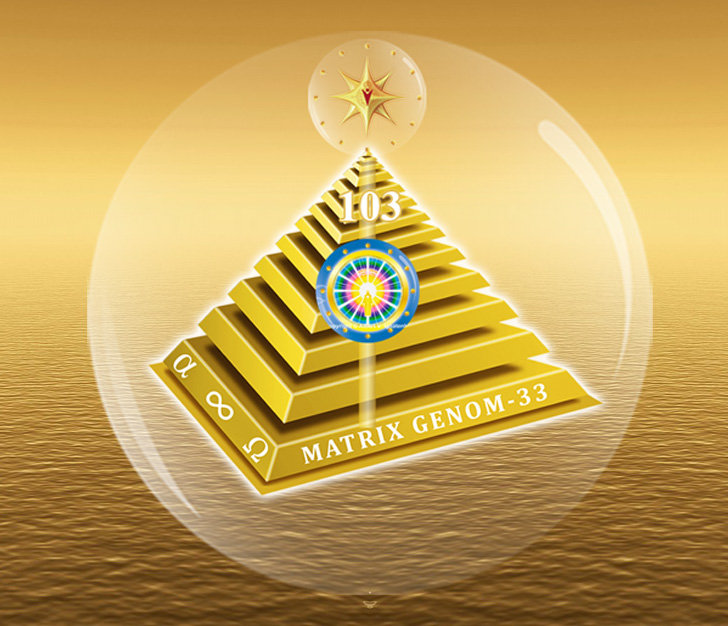 The PSY-I matrix. Genome 33 is the Pyramid of the Creator. It is located at the top of our universe and consists of 13 levels that contain 130,000,000% of Absolute Spiritual Information such as: Goodness, Love, Wisdom, Conscience, Faith, Evolution, etc. Each of the levels consists of 10 sublevels - sectors. One sector has the informational power and the speed of implementation of evolutionary programs - 1,000,000%. While working with PSY-I Genome 33, 5 sectors are involved, automatically accelerating the process of Life Time management by 5,000,000 times!. Information - the primary source of life forms 5,000,000% of different types of positive energy. For Our consciousness is information, it is an inextricably linked complex consisting of information, motion, energy, matter, space (S) and (T) time. Decoding the Genome Code 33 - information + motion + energy = 3. matter + space (S) + time (T) = 3. This is the Cipher of the Information Code of the Entire Universe, which I managed to get and translate into a new PSY-I. Lifetime Management Technology. This universal Millennium technology gives a person 100% Health, Eternal Youth and Life, opens up Brilliant Abilities, translates him to a Positive Way of Thinking, Speech and Action, guaranteed to change the Code of Fate for the better, the shortest way leads to full Happiness and Self-knowledge, the Truth of the Essence of Being and the Creator. Only once in 6000 years, the Hierarchy of the Universe, at the most difficult time for us on Earth, gives this universal technology. Accept this priceless gift!, Do not miss the Chance!.

Only Information - We can conquer the Earthly Time, knowing the information laws of the human system and being able to fulfill them.

I have conquered the earthly time

His cosmic seed
The Creator put it in my soul

Dear sirs! Practice is the criterion of truth. You are now learning to mentally run Earth time backwards. This is a training Of Your Thinking Apparatus.Sit down more comfortably, do not strain yourself.You just watch the progress of these hours and gradually your subconscious begins to automatically copy the model of their work.Is it possible? yes!

Take your first step to win over time.


Yes! I succeeded!
If you wish, and you will succeed!
We will help you with this! 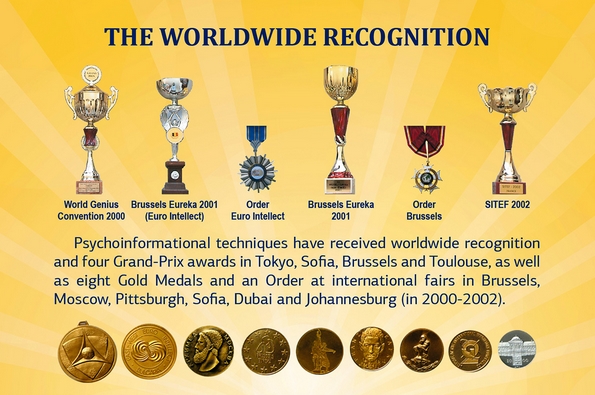 They say you can't buy health and youth? We say:
"You can make a contribution to them, and the result will be obvious!"

Maybe it makes sense to think about it and invest wisely
in the acquisition of full health, eternal youth and life? 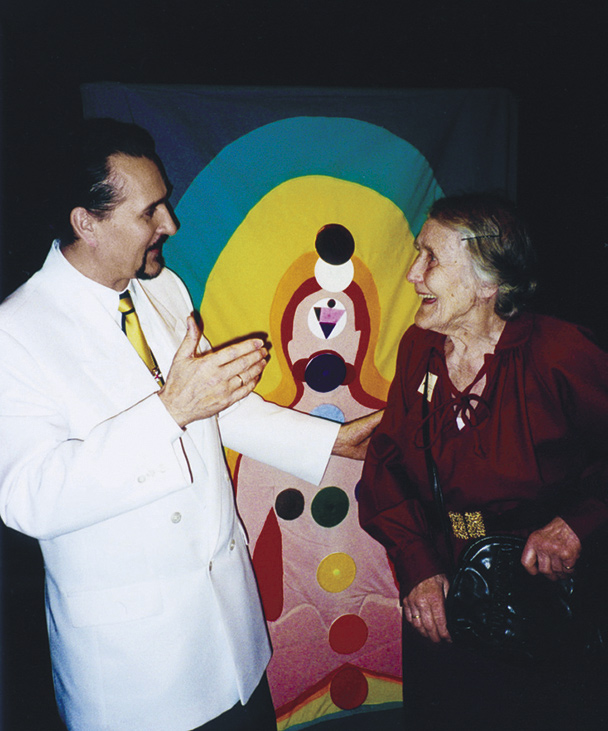 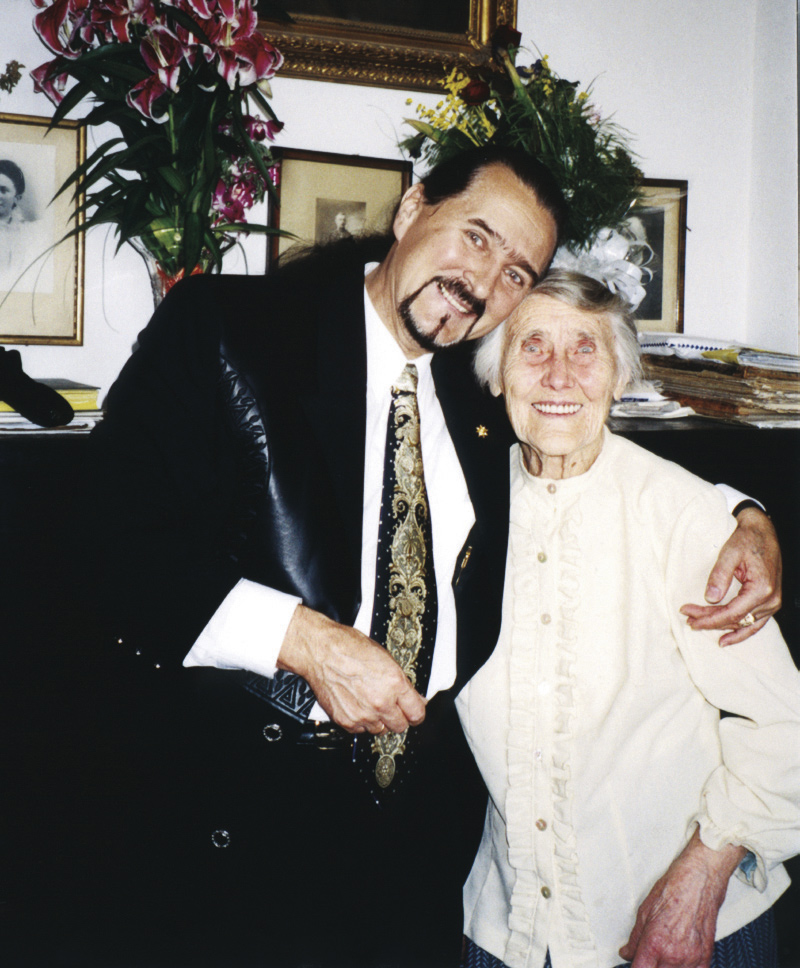 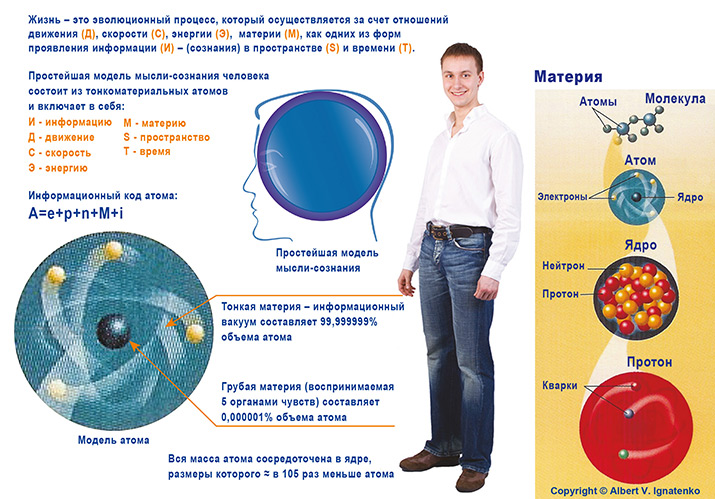 The key to victory over time and the acquisition of eternal youth and life is a New Thinking Apparatus - the Subinformation Complex of Thinking (SCM). It works at the Subatomic (mental level), which is 99.9% in Humans and contains an additional energy-informational resource from 1,000,000% to 5,000,000% or more, unlike an ordinary person 1-3%.

During the viewing of working and training films, you will master the technique of obtaining, activating and using 5 Super Matrices - 5 keys

You have a chance, under the guidance of a Teacher, for the first time in the World to consolidate and activate the resulting PSY-I Matrix. Genome 33 Life Time Management and become the first Centenarians of the Earth. 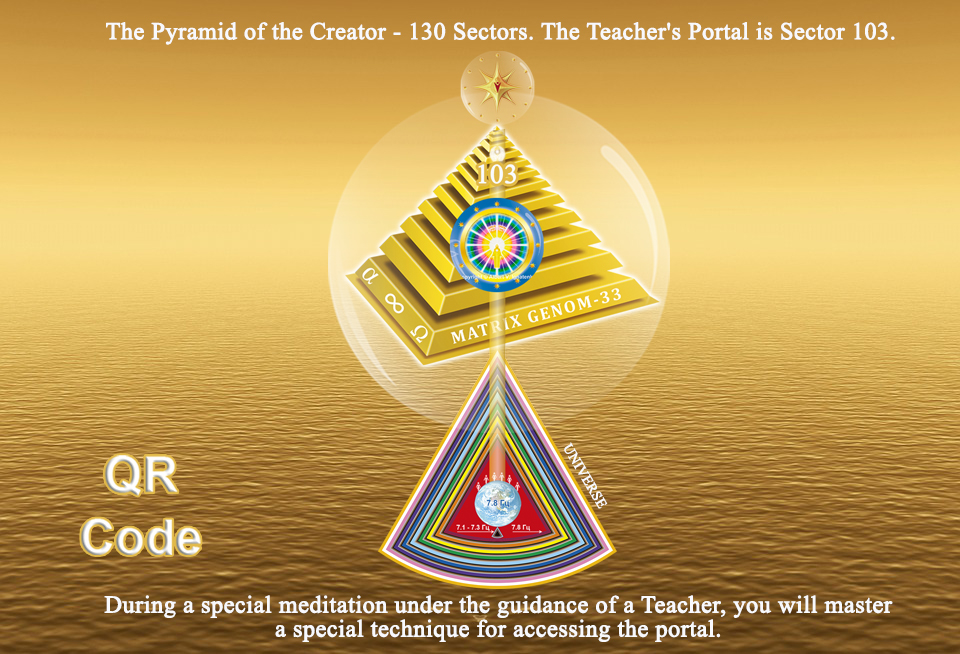 I wish you eternal youth and good luck in life. 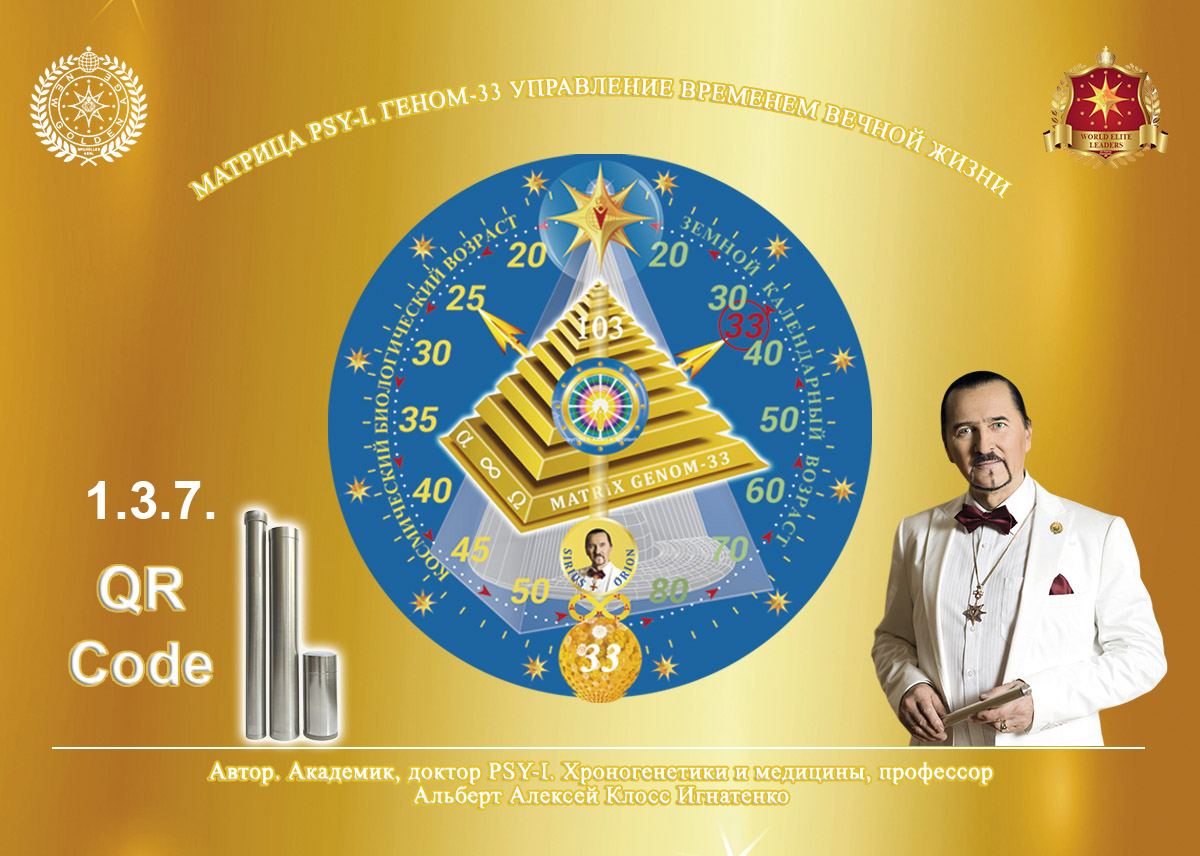 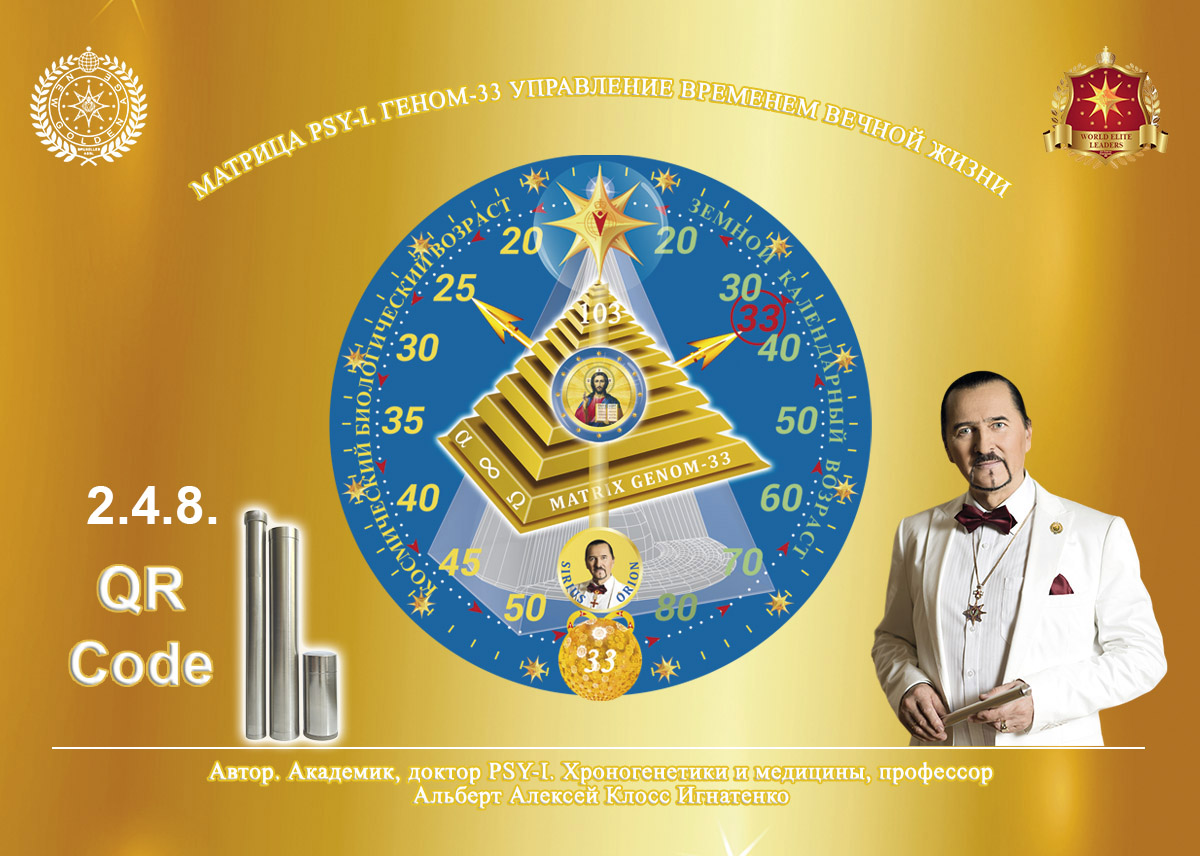 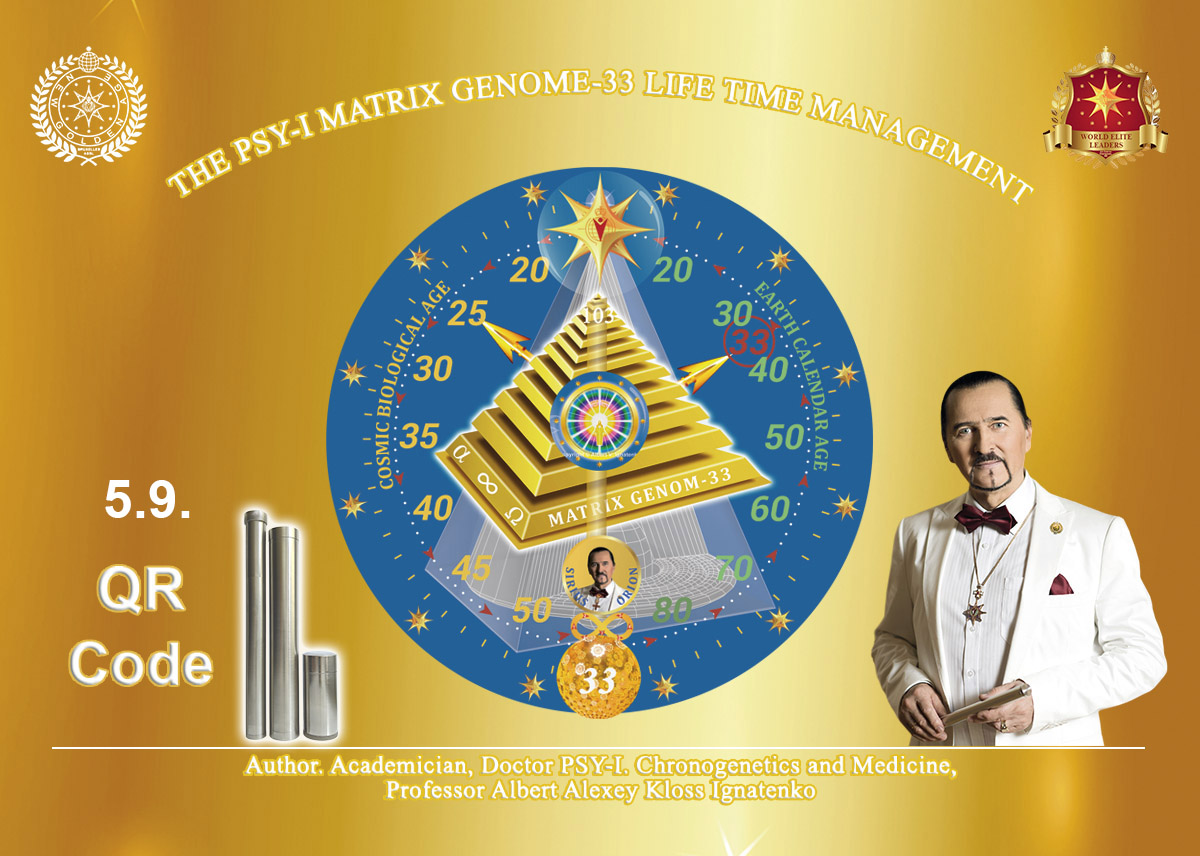 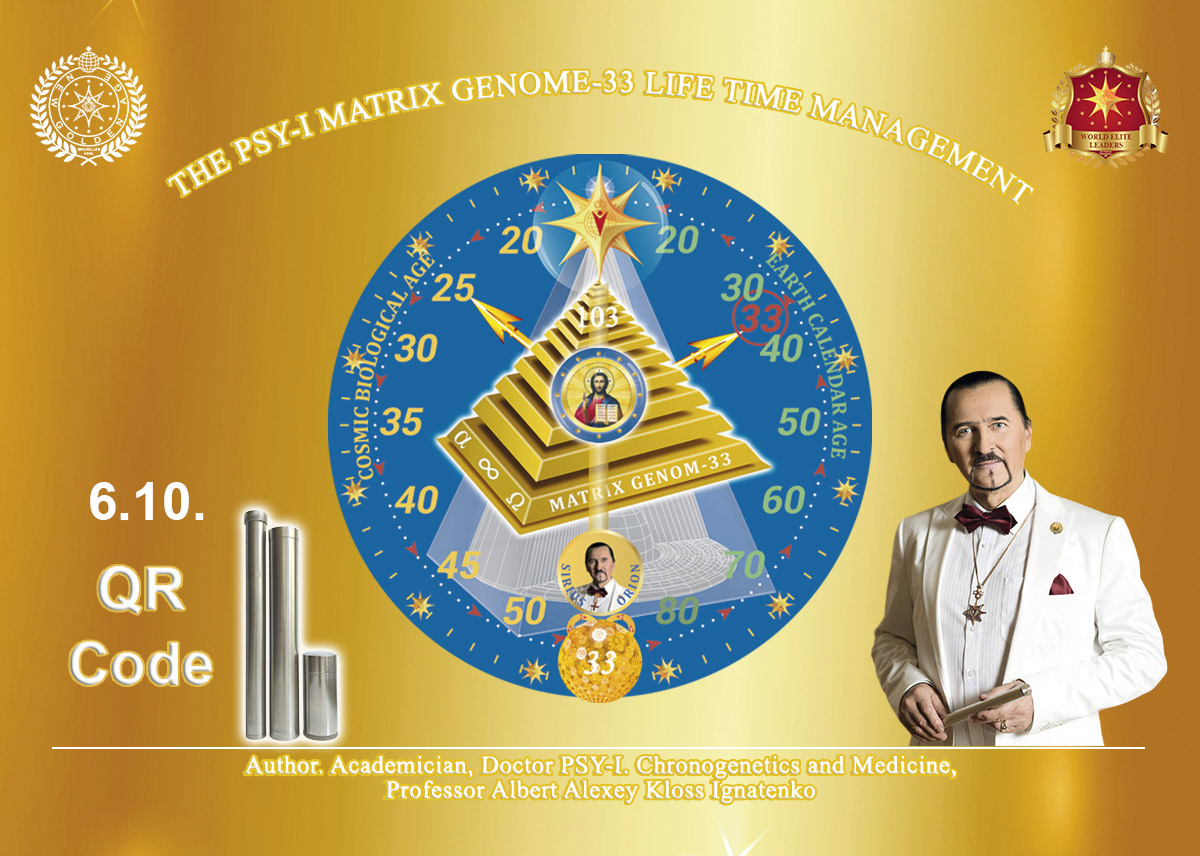 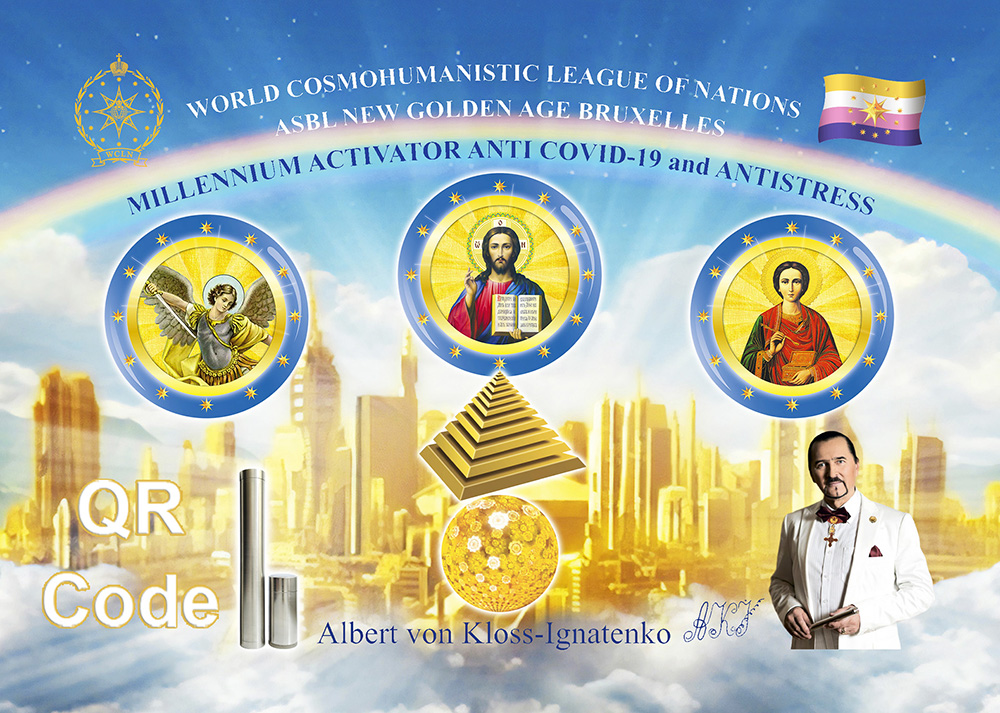 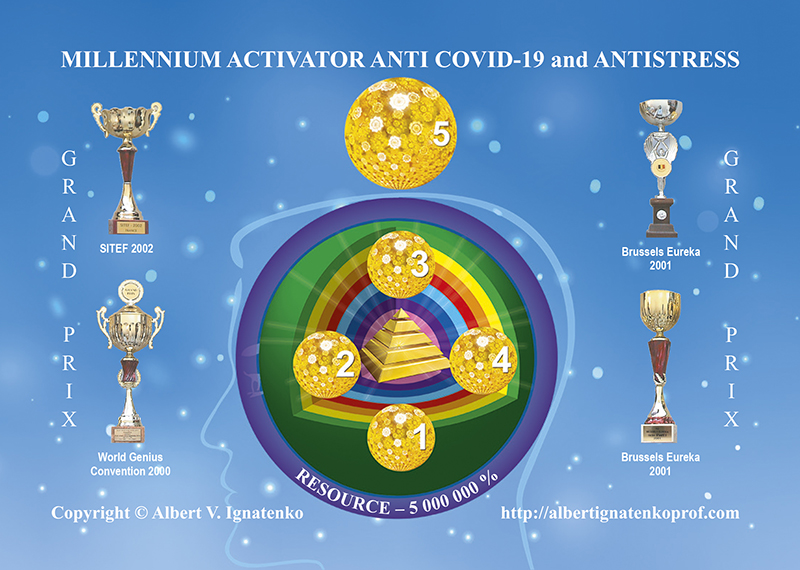 Activator of Anti Covid and AntiStress for the prevention of all viral diseases, and the discovery of superpowers with a QR code. (1) 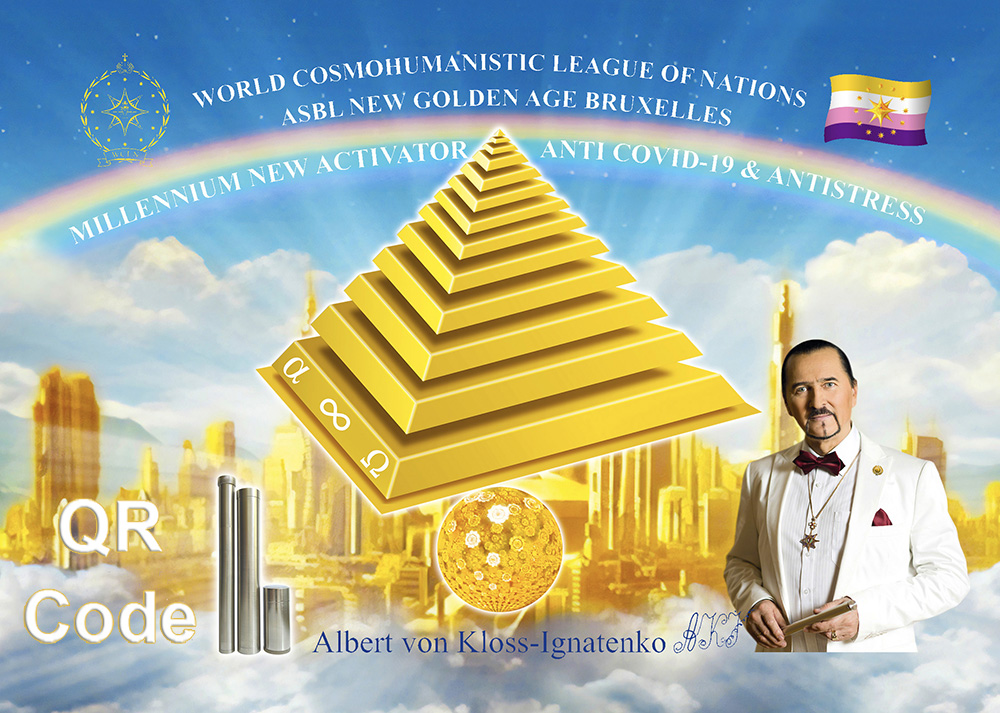 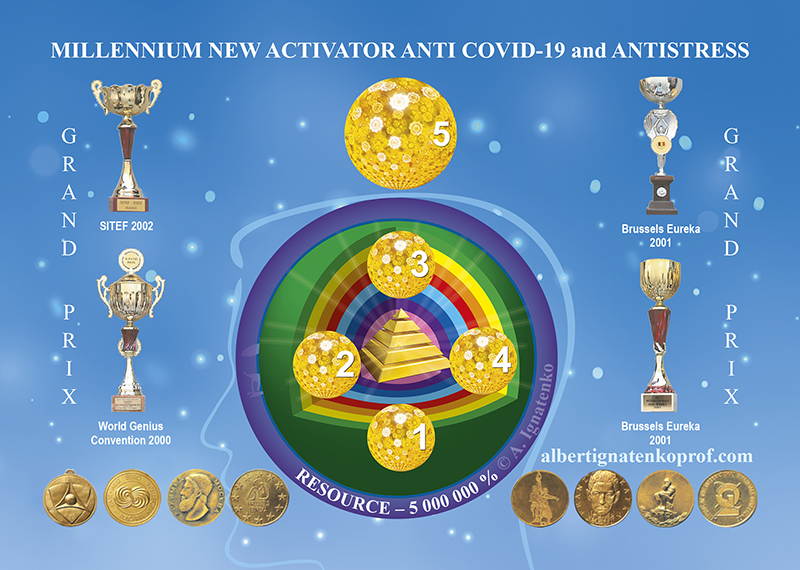 Activator New Anti Covid AntiStress for the prevention of all viral diseases, and the discovery of superpowers with a QR code. (2)

A list of meditations, activators, simulators, films and other PSY-I. technologies that contribute to the development of a Life-Time Management System and Rejuvenation of the Body.

They can be obtained using a QR CODE.

(6) Activator for modeling a successful, prosperous and happy life.

(7) Training hours for the conversion of Earth time to Space time.

(8) Meditation of Purification from all kinds of negative information - 3 fiery Golden bowls.

(9) Meditation, The Fire Energy Of The Fireplace.

(10) Meditation of Youth and Happiness.

(11) Meditation of harmonization and the discovery of abilities.

(12) Meditation is a human system.

(13) Meditation Exercise No. 1 to strengthen the Body.

(14) Meditation on cleansing the body, soul and spirit.

(15) Meditation of the Magic power of love for children, for the coming night.

A group of the world's first centenarians is formed from those who have completed a full course of study. They become members of the VIP Club "Eternal Youth". 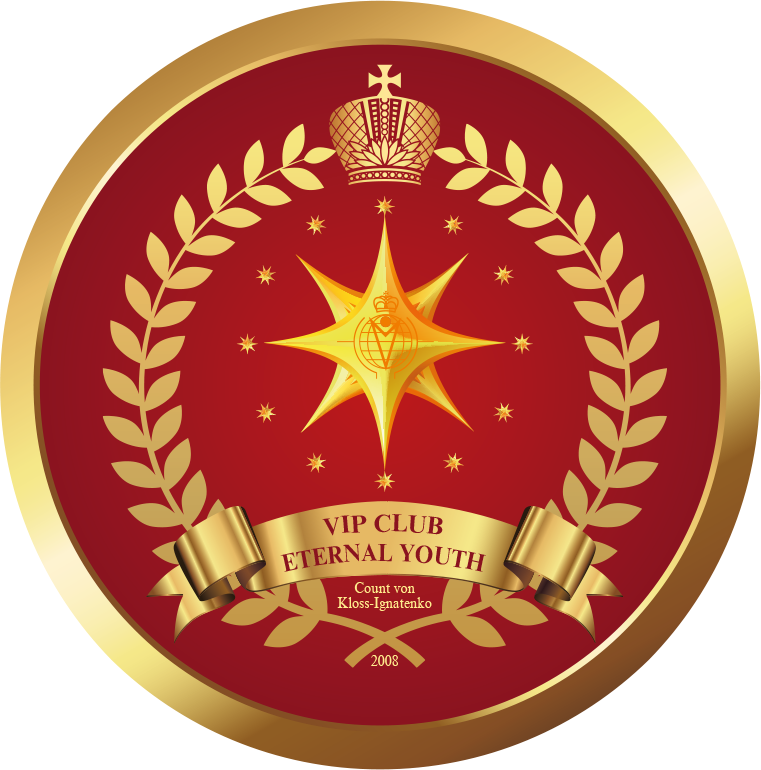 Schedule of Trainings on Life Time Management for a week

Space Simulator For Managing The Time Of Eternal Life

(Device and its Operation)

It consists of a Platform with a Portal 103 (with a resource of 103.000.000%) Matrix System, on the stand of which there are 5 Keys for controlling the PSY-I Matrix Code. Genome 33 (a 13-step Pyramid) and a Cosmoplanetary clock translating their Terrestrial Time into Cosmic Time. In the center of the Pyramid there is a special circular Matrix with a Cipher with which the Main Key interacts - a transparent Ball with 8 final Golden Stars located at the top. During the operation of the simulator, it descends vertically down and connects to a special Matrix by launching a Golden Ball located at the bottom of the stand, which during rotation gradually attracts 5 Matrix Keys located horizontally (with a resource of about 5,000,000%) and sends them to strengthen and activate Inside the Pyramid. After that, they descend in a purple shell and immediately begin to work the Cosmoplanetary Clock, the hands of which go from right to left, from Earth time to Space, Reducing the Calendar Age of a Person. 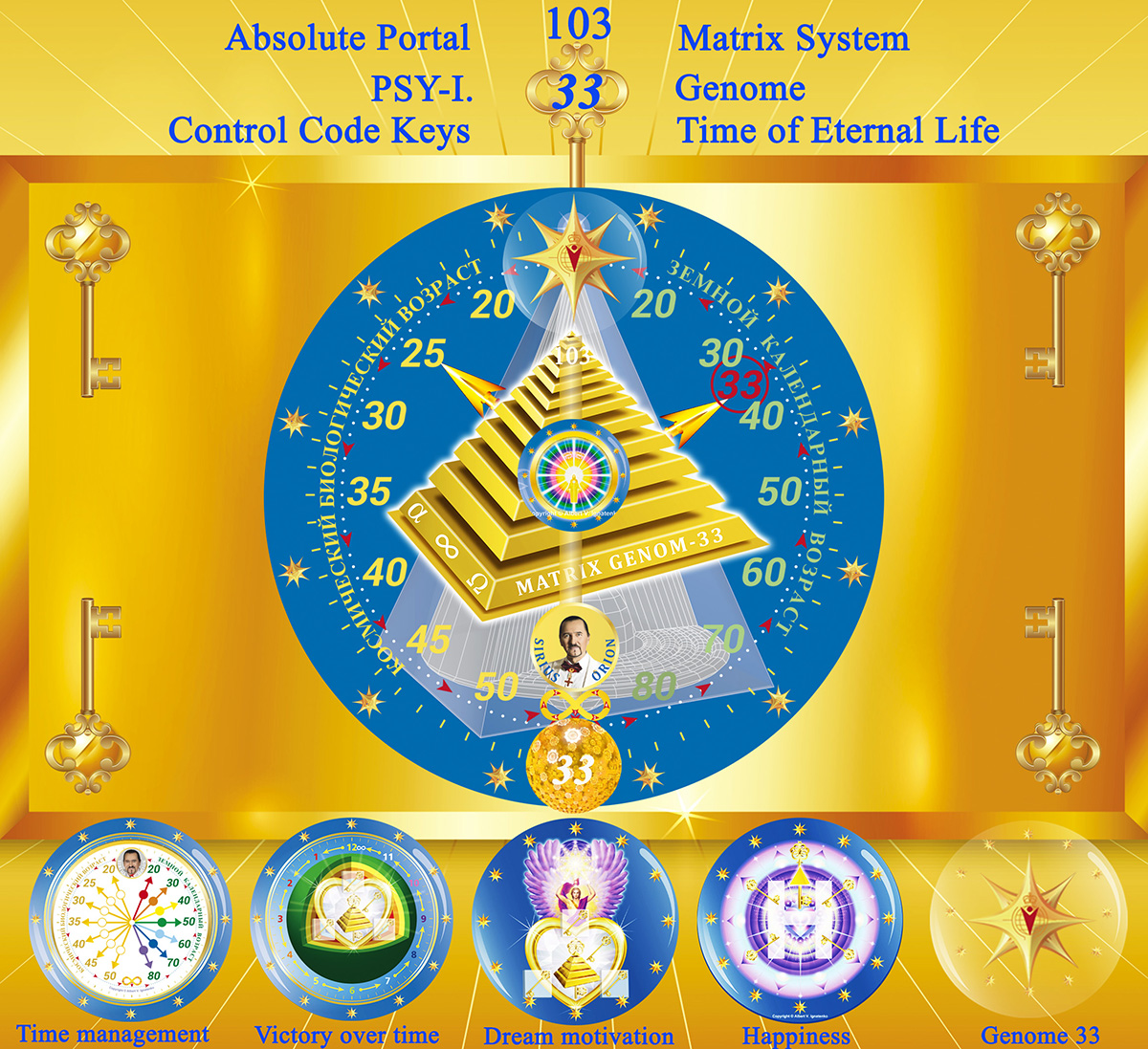 After the clock stops working on the stand, 5 Matrix keys of the Personal Genome 33 in the purple sphere are automatically sent to the Person inside the head, starting the process of the Mental Clock, the hands of which go from right to left, as well as on the simulator reducing the calendar age of the Person. The Cosmic Matrix of Genome 33 through the portal feeds a colossal amount of energy 24 hours a day to this program, which works in the subconscious of a person at the Soul level.

This introductory film, without the use of a Personal Code and a QR Code, does not function and cannot be used as a Training one.

PSY-I.T. technology of the third millennium

The know-how of the methodology of this system allows for one year to rejuvenate a person from 8 to 10 years or more, and completely suspend the biological aging process of the body. Provided that the information laws of the Human system and the Universe are fulfilled.

A very important role in this process is played by positive human emotions that give birth to a beautiful smile, facial expressions, gestures, gait and Endorphins useful for the body - Hormones of Life that help strengthen the body's resistance to various diseases.

During onalyn practical work (3 days for 2 hours) Doctor of Chronogenetics A.A. Kloss Ignatenko introduces the frequency characteristics of the patient's system into all PSY-I. technologies, including films, to the subatomic level (the level of quarks). This procedure allows you to configure all PSY-I.T. technologies for a specific individual. During work, a Person and all technologies work in unison, like two radio stations tuned to the same wave, which allows you to achieve a guaranteed result in mastering the Lifetime Management system.

Every day for 365 days, the patient watches training films (videos) twice a day, morning and evening, which automatically fix a new PSY-I.GENOME-33, which translates Terrestrial (calendar) time into Cosmic time.

In the intervals between individual practical online work with the patient, during
For 1 year (365 days), at a pre-agreed time, a 15-minute non-verbal remote session of strengthening, fixing and activating PSY-I is held daily.GENOME-33 located in the Basic Matrix Complex of "ETERNAL YOUTH AND LIFE" (which was introduced during the movie screenings). PSY-I.GENOME-33 is also found in all the Basic Matrices functioning in the human system. They work harmoniously in unison 24 hours a day on a subconscious level without interfering with the patient in his daily life and produce an additional energy-informational resource from 1,000,000% to 5,000,000% and more, allowing a person not to get tired, not to get sick, not to grow old and find eternal youth and life.

Professor Albert Von-Kloss Ignatenko, while working with patients, being on the Platform 103 of the Pyramid of the Creator, uses his super-powerful thinking apparatus with an energy-informational resource of 103,000,000%, unlike an ordinary person using a reserve resource of 1-3%. They also use a large arsenal of verbal and non-verbal methodologies for entering, strengthening, fixing, activating, connecting to Special Portals of the Universe and the Teacher's Egregore 10 Super-Strong Basic Matrices with PSY-I.GENOME-33.

Space Simulator For Managing The Time Of Eternal Life. 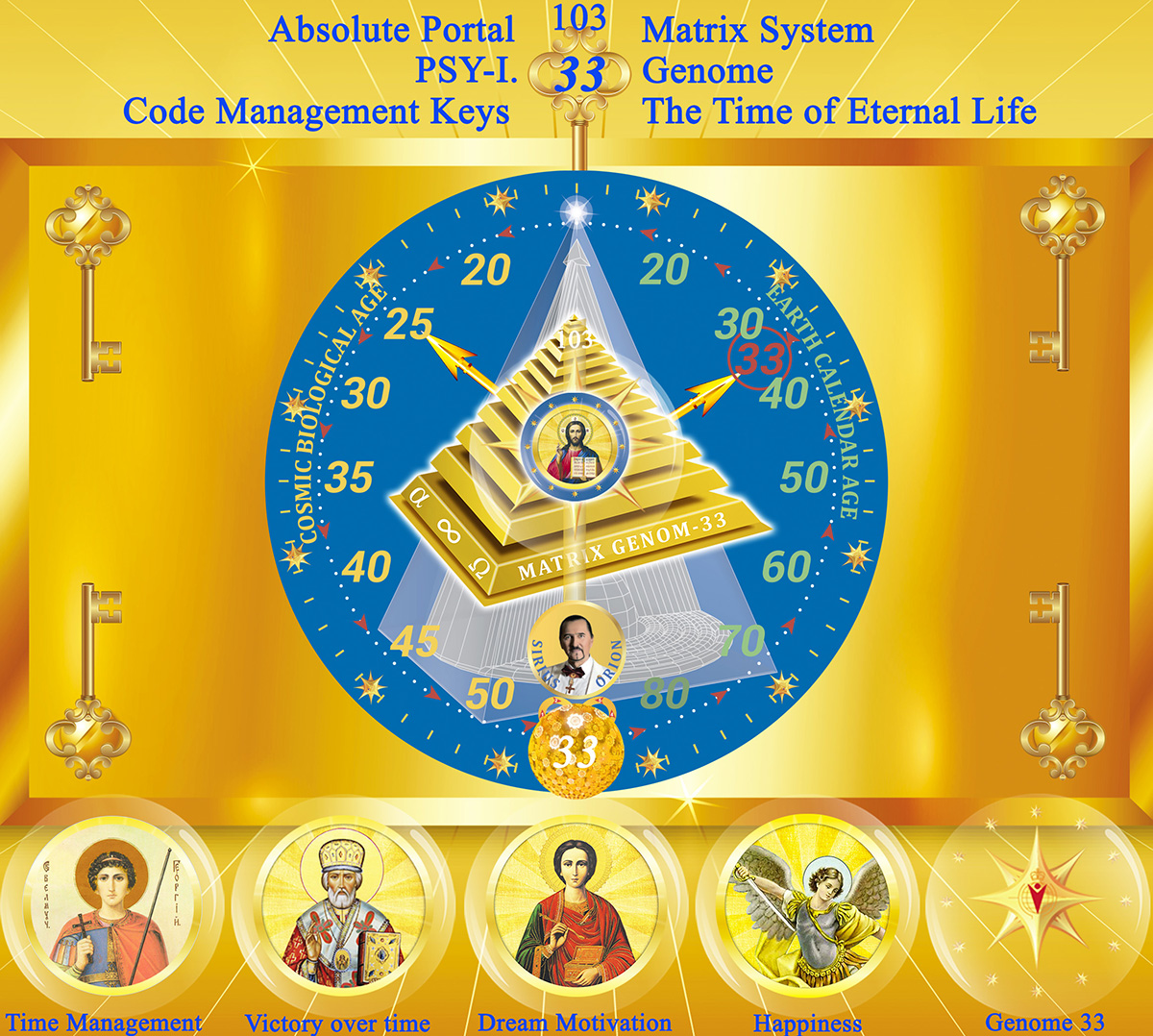 This introductory film, without the use of a Personal Code and a QR Code, does not function and cannot be used as a Training one.

Cosmetologists of the third Millennium
We use the most environmentally friendly and effective cosmetology in our program. 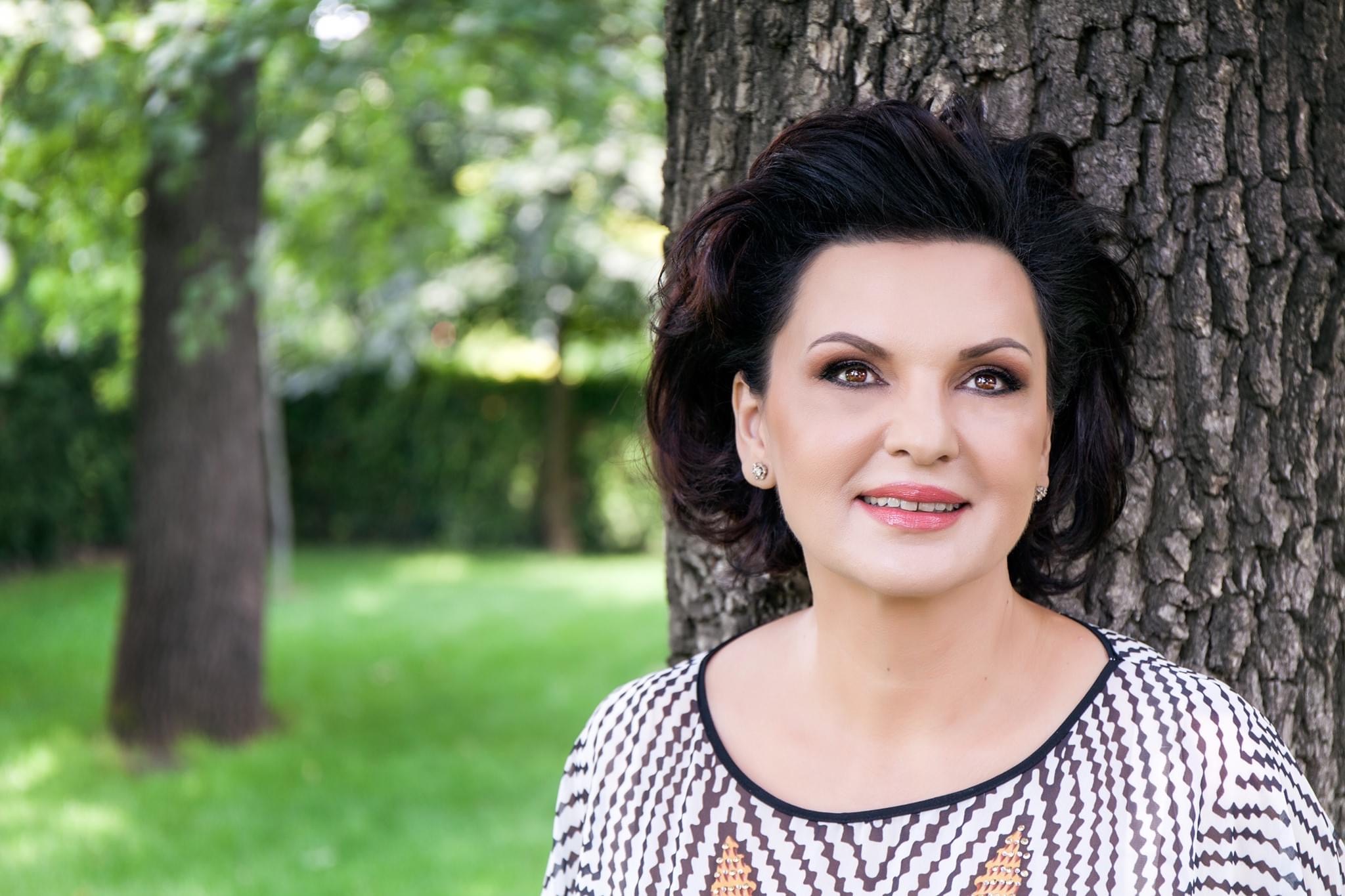 The author and creator of NEOS products is Doctor
of Psycho-informational Sciences - Nela Ignatenko. 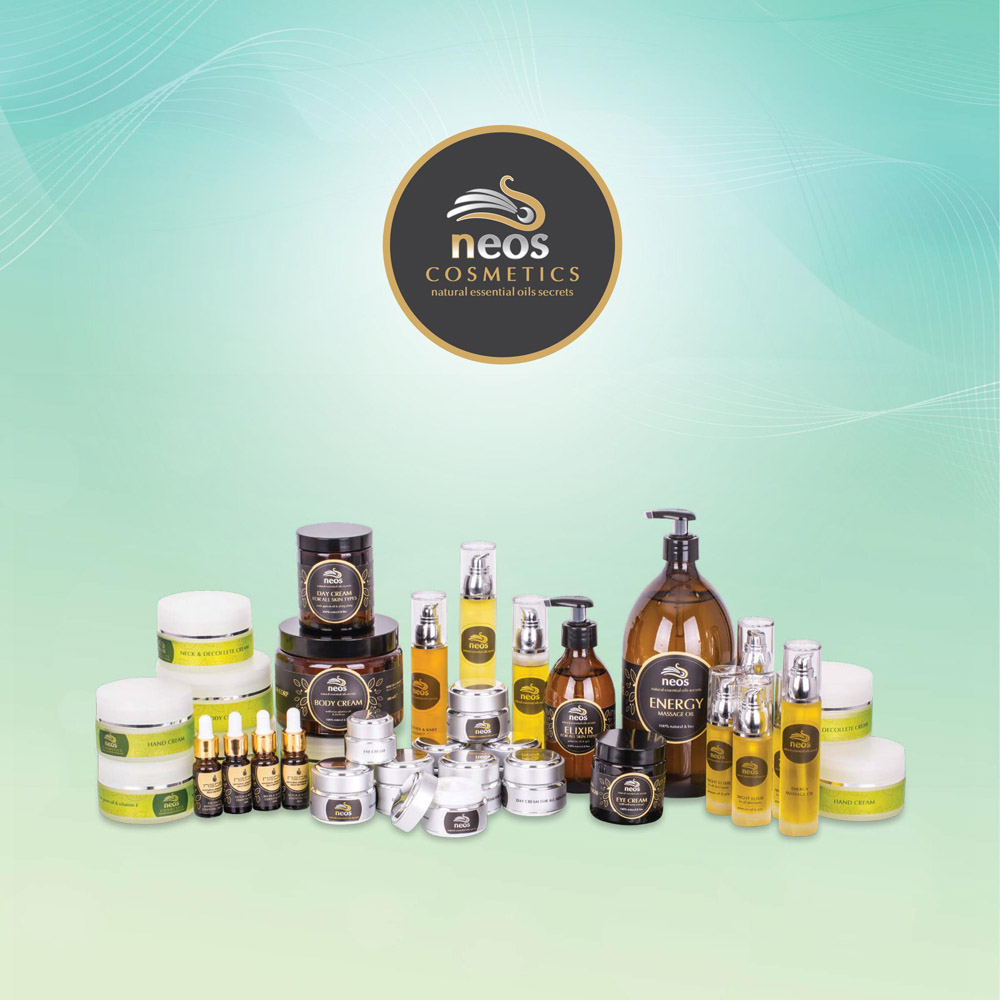 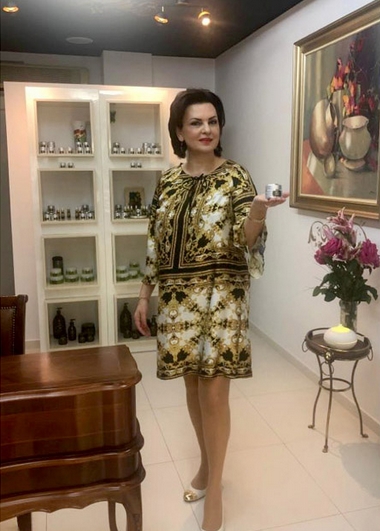 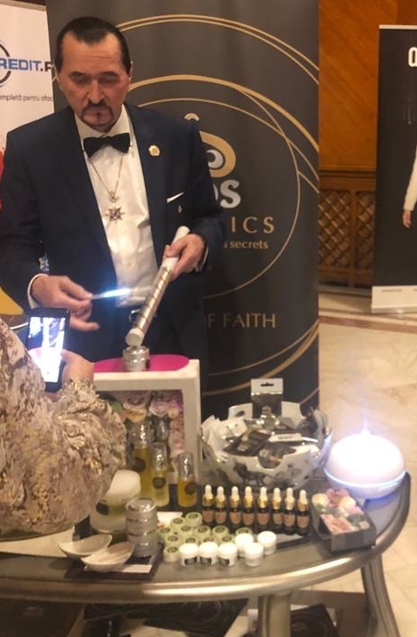 During the transfer of the color and intellectual information of the matrix into the structure of the cream, a device is used - the "Tesla Rod" 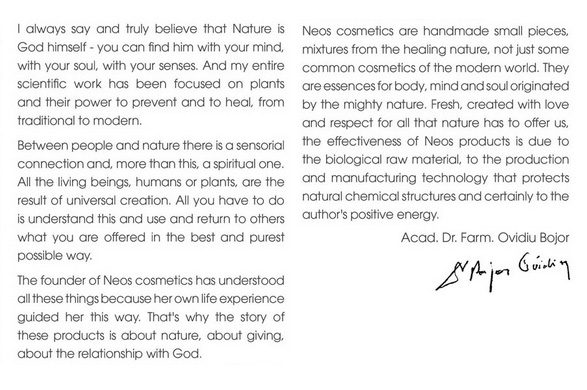 SINCE 2000, OUR HARMONIZERS, NEUTRALIZERS AND ACTIVATORS HAVE BEEN USED BY BUSINESS, CULTURAL, POLITICAL AND SCIENTIFIC
THE ELITE OF THE WORLD COMMUNITY.