The Message Of The Spiritual Master

Our Civilization entered the age of Aquarius - the era of Love, Goodness and Light.

The 21st century is the century of spiritual and information civilization, in which all sciences, arts, philosophies and religions will unite. This will contribute to the birth of COSMOHUMANIC CULTURE OF NEW GOLDEN AGE of the civilization of EARTHMEN.

The spiritual rebirth of Humanity and the affirmation of the principles of moral values are the only way our Civilization should go.

Ancient philosophers said: "Knowing yourself, you will know everything." The fundamental science about Man and the Universe cosmoeniopsychology successfully solves the problem of self-knowledge, self-improvement and self-realization.

Modern philosophers say: "One who owns the information, owns the World." Science psychoinformationology that developed the most efficient in the world rapid methods (PSY-I. T.) operate the spiritual and moral information, solves the problem of the speed reorientation of our civilization for making a true evolutionary information of the Laws of Existence.

The change of society will be gradual, evolutionary and inevitable. Cosmohumanistic Teaching of science and program of the Project will help to accelerate this process.

This vision of the future is no longer an idealistic illusion - it is based on the knowledge of the relationships between Micro - and Macrocosm, as well as on the scientific knowledge of Cosmogumanistic Spiritual and information Evolution of Humanity leading to THE NEW GOLDEN AGE of the CREATOR.

May the Creator and his Hierarchy Of heavenly Teachers help us in this noble work! 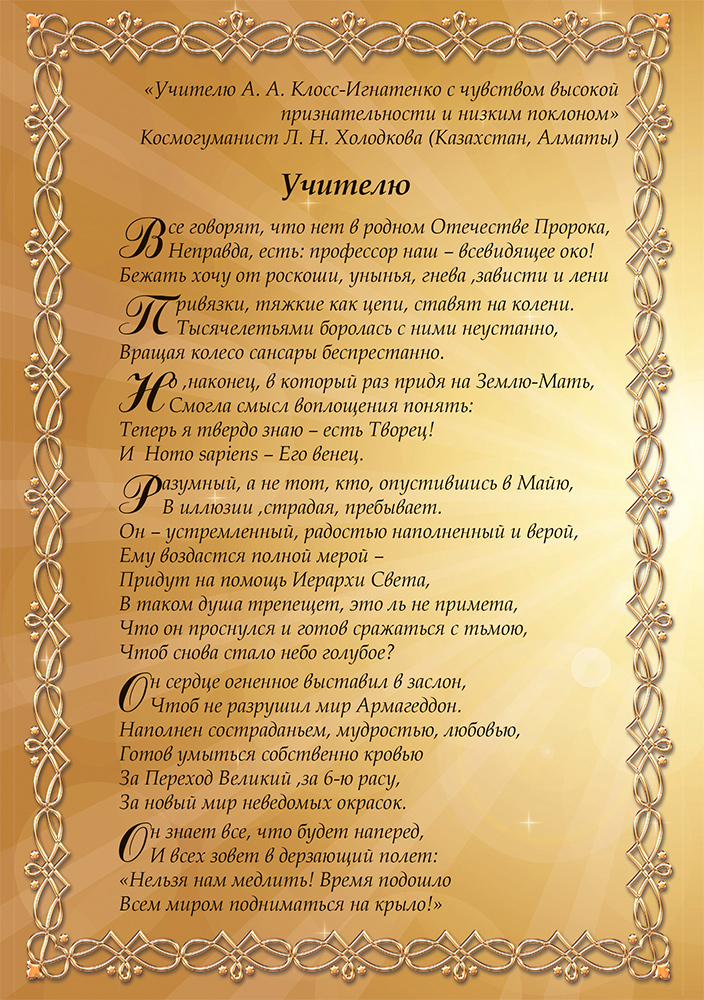